This is the transcript of the session for Create your Emmy-Award Pitch.

*Disclaimer: Beginning polls and audience member pitches are not included in the transcript.

Moderator: Maybe you can give us a little bit of background about yourself from being an Emmy Award winner newscaster and now CEO of soul cast media.

Jessica: Thank you so much Chris and Jane for inviting me and hello everybody I mean I can see some of you guys on my screen not everybody but hi and thank you for  joining today’s call with us. Chris and Jane reached out to me and was telling me about the organization and what they do and I was like yes,  absolutely I want to help. aAs Chris mentioned my background, I was a former television news reporter. I’m based in California so I used to work for ABC and I was in the news industry for about ten years until about two years ago I decided to make a very tough decision of leaving but wanting to be an entrepreneur like many of you guys I’m sure on this call that was something I’ve always been interested in doing. So that’s when I decided to take all the skills I learned in TV, things like education and communication, storytelling, interviewing. These are all things that we had to learn, writing as well and I decided to create an agency focused on that and as Soul Cast media grew, It was interesting, I I noticed that a lot of the people who I ended up working with were entrepreneurs. So the company had a nice little niche where we do work with entrepreneurs and founders. it’s nice being in California, I’m down in southern California I should say, so it’s very easy for me to fly up to the bay area in Los Angeles. That’s just a little about what I do so I’m very happy to be on the call with you guys and I’m excited to listen to your pitches in just a little bit.

Moderator: All right excellent thank you Jess again I think given the current environment as well as your experience and thoughts around this is extremely valuable for all of us right now because we’re doing everything via video. As a late night newscaster, who else to learn from?

Let’s get right into it. As I build pitches, I think of it as kind of three phases. One is obviously building the message. Two is practicing the message itself. Three is the big day of the presentation itself.

Let’s start with the first one which is building a message. I guess I always think you know, especially as a newscaster, within the first ten seconds you gotta grab your audience there, your investors, your customers. How do you make a bold statement or powerful statement. What are your thoughts around that?

Jessica: When it comes to preparing your message it is really important that you spend a lot of time thinking about this and what I always say when it comes to preparing your message. The easy way to think about it is to kind of break it down. You have your beginning which is how you’re going to start your presentation, your middle of your presentation, and how you are going to end your presentation. All of this should have a really nice flow between the three. When it comes to starting off your presentation, there are two things that I always say are really important to think about. First is your audience. This is coming from my background as a television news reporter. One of the things that we were always taught before we were going to go live or we were going to present was to be very mindful of the people we were talking to. At that time those who were our viewers. This was really important for us because if we weren’t tailoring our message to the people we were trying to talk to, it would easily just go in one ear and out the other. It wouldn’t have the effect that we want. So understanding who our audience is. In this case it’s VC investors and you know within VC investors there’s different categories, and within each investor you have different interests, each of them have different personalities. You have to spend the time in understanding and researching their likes and don’ts, making sure you’re tailoring your message to them. That’s number one.

The second thing when it comes to the beginning of your message is starting off with a bolder statement and this is after you’ve done your quick introductions but when you’re about to begin your presentation, what is that really big bold message that you want to say for them to remember. If there is anything you wanted them to take away about you and your company, what is that? Is it that you solved this problem or you have the solution to whatever it is about your company. Starting off that message is great because what that does is when we start with a bold statement, you captured their attention. If you cannot capture their attention early on, it’s really hard to capture their attention in the middle of your presentation. When you start with a bold statement you also generate a lot of curiosity, because the people listening are like well okay all right how did they get there? I’m interested now. So the beginning is really important about preparing your message. 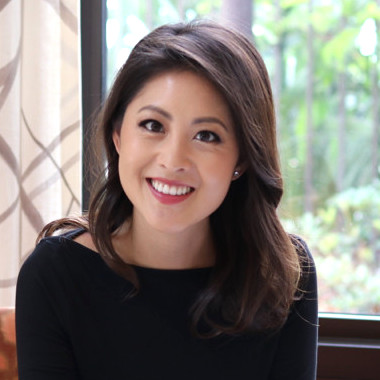 Jessica Chen is Founder and CEO of Soulcast Media, the world’s first communications relations agency.  As a former Emmy-Award winning reporter, communications and speaking confidently came very naturally to Jessica. Except, that was not always the case.  Beginning when she was six years old, Jessica recalls watching the nightly news with her family. The confidence displayed by newscasters compelled her to study presence, strong communications and what resonates with an audience. Her first time delivering a live news story on NBC 4 News was on Christmas Day and she recalls feeling an overwhelming sense of anxiousness. She was gripped with fear. (Thankfully, it went smoothly).

Now, after dedicating nearly ten years in television news, Jessica has refined the art of communicating. She has developed a formula for building meaningful connections that translates in business. Jessica is on a mission to help professionals, entrepreneurs and executives build their confidence in speaking authentically, and to teach the use of storytelling to create connection and engagement on various media platforms.   Jessica has been awarded an Emmy-Award for her work at ABC 10 News and multiple Associated Press Awards.

This is an affiliation link. CAIF would receive referral fee if you sign up. If you plan to signup, please use this link so we get something for free services. But if you don’t sign up, it’s no problem at all!!
https://courses.soulcastmedia.com/?ref=ccf068

Chris： So you can see the question here. Leading companies in which of the following industries groups raise the most […]

Part I: SPV Investing good for startups and investor by Jonathan Ip What is SPV Investing? Special purpose vehicle, also […]

What elements should the scorecard involve for evaluating startups? 1. Team (20 Points): a) Founder’s passion and knowledge b) Appropriately […]

Part I: How to identify good startups (Presented by John Hamblin) What should you know before investing?  Understanding the […]

Use Video Use of a multi sensory communication is critical online. The trend to video  is not new or groundbreaking […]

1. Stage of your Business whether it is in an early-growth or matured stage 2. Business model must make sense […]

PART 1 – Fractional CTO (Presented by Jonathan Foo, TMQ Consultants) What does a startup CTO do? Responsible for the […]

Tip #1: Understand your target audience Tip #2: Start your pitch with a bold statement Tip #3: Your body language leaves the […]